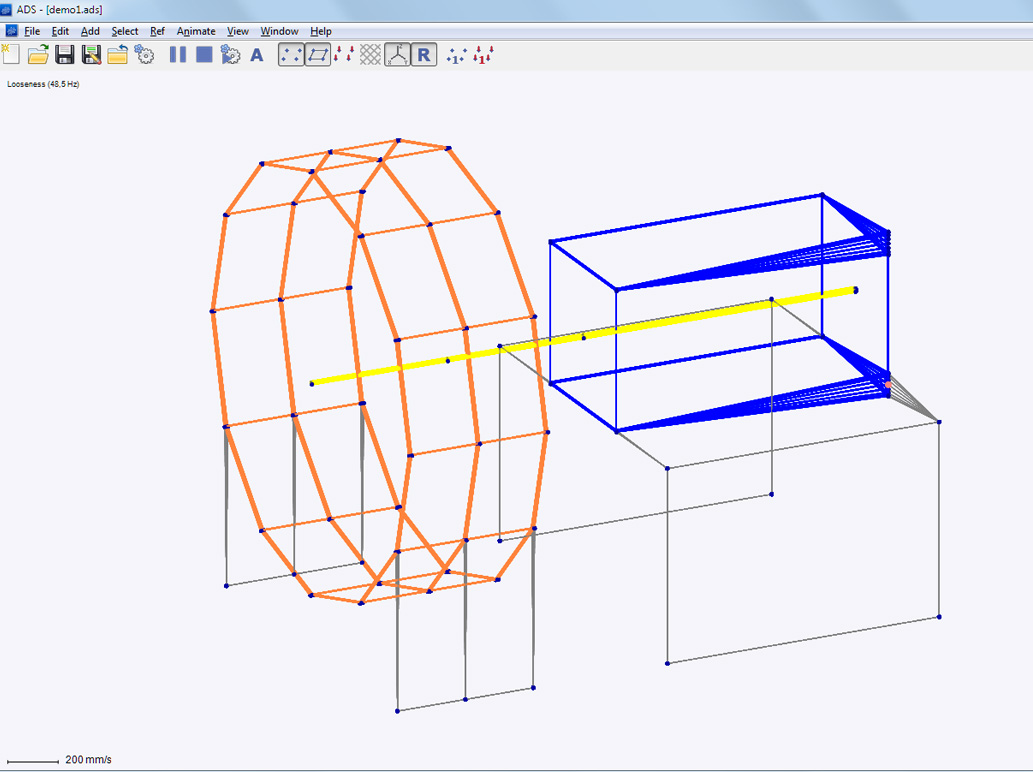 The Animated Deflection Shapes (ADS) is a method that can help you find the source of problems on running machines by the simple visualization of vibrations.

A PULP and paper mill had a big problem with an exhauster, which was a machine critical to their production process. First of all they started a predictive maintenance programme with a simple vibration meter, checking the machine every week. Later, they decided to use an online monitoring system to monitor the exhauster 24/7. After many attempts to fix the problem, they found that something more had to be done to keep this particular machine running.

The company thought that a poor alignment of the machine set was made after the coupling repair and after the next coupling repair they invited two independent companies to double check the precision of the alignment. It was clear that the alignment was fine. However, after some time, the coupling broke down once again. In this case, if they could have seen how the machine was moving, it would have been much easier to pinpoint the exact source of their problem. This can be done with the aid of ADS, a software programme based on the concept of operational deflection shapes (ODS).

Using this software enables the visualisation (in animation) of vibrations of a certain machine. During the animation in ODS the vibration movement is slowed down to a very low frequency, for example 0,5 Hz, while the real frequency of the machine was 25 Hz and the amplitude of the motion is increased to a level so the human eye can see the vibration. It is a combination of vibration measurement and software processing. The output of the method is the animation of vibration movement on one or multiple forcing frequencies.

The results shown using this method are understandable to everybody who is familiar with the machine as the movement is visualized. When you take vibration data and detect a high 1 x peak, you might define it as unbalance based on your experience or pattern recognition. But, where is it vibrating and how is it vibrating? The whole machine is vibrating as it runs. It’s hard to know if the vibration is at the coupling, in a bearing, at the motor or in the frame that the machine is bolted on.

The ADS simulates the running condition of the machine on the computer screen or even on the screen of VA4 Pro analyzer. First, a mesh model of your particular machine must be made using ADS software. Then the mesh model is transferred into the analyzer. Vibration data is collected at each measurement point with the analyzer the animation can be run right on site with the press of a single button. The ADS creates an animated image on the screen that mimics exactly what the machine is doing. Then it is possible to focus and expand on any part of the machine model and see where the source of the vibration is coming from. The model can be completely rotated in all 3 dimensions of space to provide a view of any operation angle.

Locating the Root Cause

This way the pulp and paper mill found that their motor’s concrete foundation was loose. The ADS animation clearly showed that one side of the non-drive motor end was vibrating. This was impossible to recognize during the installation as the alignment of the set was always giving acceptable results. Unfortunately the damaged concrete foundation was moving with the motor in a vertical plane, which was creating undesirable load on the coupling. The coupling could withstand this load for a period of a few weeks, but then inevitably broke down again.

Engineers from the paper mill were very pleased with the animation, which finally solved their long-term problem. They fixed the concrete foundation and their machine has finally begun to run smoothly. This has saved thousands of Euros in coupling repairs that were being carried out every two months. They saved a lot of engineering work and last but not least they are continuously producing which is the most important part. One hour of stopped production line was worth ten thousand Euros.

The ADS was programmed especially for use with the VA4 Pro -analyzer, which is a new concept as you can run the animation right on site in the analyzer. However, if you don’t have this device you can use the ADS as a standalone software programme. You can still create a machine model, collect amplitude and phase with a vibration analyzer and enter the data to the ADS software manually.