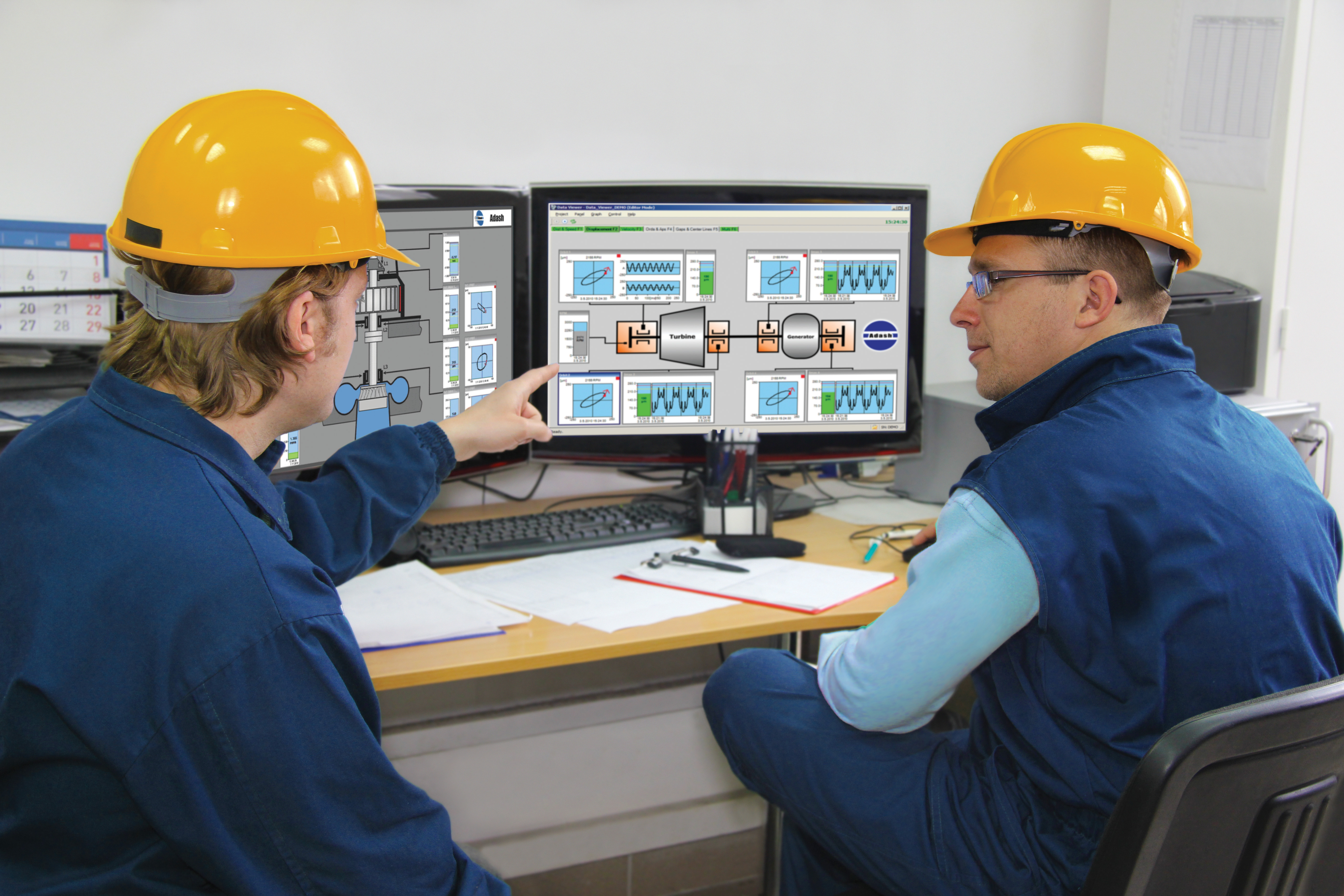 Online vibration monitoring is essential for critical machines. There are machines that need to be monitored continuously; it is not enough to take a measurtement every week, or even once per day.

THE CHANGES IN VIBRATION values between certain time periods could have a large negative impact on production if they are not caught. In such cases, so called online monitoring is essential. This means that the vibration values are continuously measured in a system that will give a warning if certain pre-determined limits are exceeded. The system can also switch off the machine automatically when the determined danger value is exceeded. Now the important question is what exactly does it mean to monitor and measure continuously? Does it mean taking a measurement every minute, every 5 minutes? Do I save all of the values to the system? How can the system work with such a large amount of data?

The conventional model of data acquisition used by many brands measures the required values in a defined time interval. This means that if I decide to take a measurement every minute or every 5 minutes, I need to set up this time interval in the system. The system then takes the measurement at those pre-defined time intervals. A very important fact is that ALL of the measured values are saved – for instance at every 5 minute interval, new data are saved. Those properties lead to some disadvantages. Let’s describe them in more detail. Let’s assume that I define a 5 minute time interval for data acquisition. The measurement itself takes only one second. What if something happens during the time interval between those two measurements? Many things could happen during those five minutes and there would be no record of it at all. Another disadvantage is that when I am saving all measured data, the size of the database increases rapidly. If I would like to set up a shorter time interval to take more measurements, the database size will grow even faster. For example, when I set up the time interval to 2.5 minutes, the database will be twice as big as the one with the interval set up to 5 minutes. So as you can see it is always a very hard decision what time interval to set up. Am I able to deal with such a huge database? Will I miss important information if the time interval is too long? With fast increase of database size your computer may be slowed down and the database engine you have may not be sufficient. When dealing with huge databases it is necessary to purchase some special software engines. The powerful and expensive SQL database is necessary; the price of this SQL database may climb up to the price of the online monitoring system itself and its difficult set up may complicate the work with the system. We can say the conventional model of data acquisition is quite simple and easy to understand but it has its disadvantages.

To avoid the disadvantages mentioned above, the Adash company has developed Adaptive Model of Data Acquisition for online monitoring. Let’s go back to our first question. How often do we need to measure the vibration value? The ideal answer is continuously; it means starting a new measurement immediately after the previous one is finished. If the measurement takes 1 second, we should measure every second. This is ideal, so let’s really do it this way! We measure continuously and there is no way we could miss any important change of value.

Ok, now you may ask what about all the measured data? We have said the database size would grow rapidly if the measurement time were increased from every 5 minutes to every second. Isn’t it insane? No, it is not! The trick is hidden in data saving. The measurement could be taken for example every second, but why would we need to save all the measured data if the values are still the same? So here comes the trick: the model of adaptive algorithm for data acquisition. This adaptive system decides which values need to be saved and which values don’t. So let’s say I take a measurement every second for the 5 minutes and the value is still 3 mm/s. I have measured this value 300 times during those 5 minutes, but I don’t need to save it 300 times! It is enough for me to save it just once and this is exactly what adaptive algorithm is doing for me.

How does the adaptive algorithm select which data to save?

Take a closer look on how the adaptive algorithm selects which data to save and which to erase. As mentioned earlier, the adaptive algorithm does not save the values that are not changing significantly. A definition then of significant change should be made. We usually set up the significant value change to 5 percent. So if the measured values haven’t changed more than 5 percent compared to the first value, there is no need to save the measured data, it is not important to us. Why was 5 percent chosen? Because from experience we know that there is never anything really important happening in this 5 percent range around the measured value. See from the pictures how it affects the actual saved data.

What Happens if Nothing Changes Significantly?

When the values don’t change over a really long time, only one measurement would be recorded, which is also not ideal. There is a time interval for saving data defined in the adaptive algorithm system, which represent the longest time I can have without data being saved. When I set up this time interval for saving to e.g. 4 hours, I save a measurement every 4 hours even if the value has not been changing significantly. I believe you can see the difference between a conventional system and the new adaptive algorithm already. Imagine how much data we would store just during one day with a conventional system; during 24 hours it would be 288 saved measurements when taking measurement every 5 minutes and we still cannot be sure that we haven’t missed anything. With the adaptive algorithm, during those 24 hours, we would get only 6 measurements stored if there is no significant change (when the time interval for saving is set up to 4 hours) and we would be sure that we haven’t missed anything as we are really measuring continuously. The size of the database is much smaller in this case. Obviously if there were significant changes, more measurements would be saved, but they would be important measurements that are worth storing. The Adash online monitoring system A3716 with new adaptive algorithm is controlled by Adash DDS software. You can run the database system in DDS software even on a standard laptop.

Why is it called adaptive?

The system can adaptively change some of its parameters. When you measure the machines where the vibration values change a lot and it is common for their run, the adaptive algorithm sets up the significant value to a larger value so that it does not save insignificant data. Look at the picture showing how it affects the saved values. You can see that even when the significant change is set at 50 percent all really important values stay recorded.

This adaptive change of parameters can be done automatically by the system itself, but if the user wants to be certain of the set up, it can also be entered manually.

I have not described all the decision parameters of the A3716 adaptive algorithm as some of them are more complicated. However the algorithm does those decisions for you and you get the results which you need. It measures really continuously and saves just the values which are important. Some users may be little scared when they see the graph of recorded values and they see just 2 values, for example. They are afraid that just 2 values were measured, but no! The system was measuring continuously, but only 2 values were worth to save. You can be sure that nothing has been missed and you can sleep well.